30 Jan Author: admin Comments: Comments Off on Arizona Cardinals the best in the NFL…when it comes to branding and image In: Branding and Identity, Case Studies

Author: admin In: Branding and Identity, Case Studies Comments: Comments Off on Arizona Cardinals the best in the NFL…when it comes to branding and image 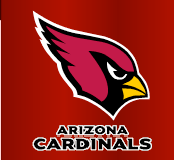 A few years ago the Detroit Lions were hosting the Arizona Cardinals. As I watched the game, I flipped through the Cardinals media guide. Quickly, I could tell this was no ordinary media guide chock full of player stats, records and front office personnel photos.

This media guide gave you a real flavor of a first-class organization. Now, if you’ve followed football at all during the past several decades you know that the Cardinals and Lions have been two of biggest bottom dwellers in the NFL as far as the standings show.

But that day when I looked at that media guide, I could tell that the Cardinals got it. That year they had made very minor tweaks to the logo on the side of their helmet and they introduced an identity campaign that stands above that of any professional sports team. The corporate identity included the creation of an original typeface and a full-page explanation of the program in the media guide. The updated red and yellow colors in the logo were now more vibrant and eye-catching.

The team was also preparing to open the new Cardinal Stadium the following year. If you haven’t seen it, this venue (which happens to be hosting this Sunday’s Super Bowl—how’s that for a timely posting!) is an architectural marvel with a retractable roof and a grass field surface that can be rolled out into the parking lot so the stadium can host other events without affecting the turf. The Cardinals also tapped international branding giant, Pentagram, to design the stadium’s graphics.

As someone who pays very close attention to the branding of sports teams, the Cardinals are the best, hands down. Now if they could only get the product on the field to look as good.